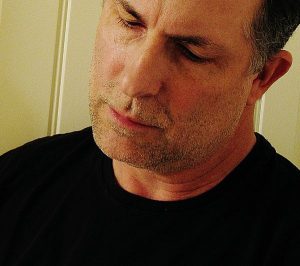 Rollin Jewett is an award winning playwright, screenwriter, singer/songwriter, poet and author. His songs have won the International Music Software Trade Association (IMSTA FESTA) Award both in 2015 and 2016. His feature film credits include “Laws of Deception” and “American Vampire”. Mr. Jewett’s poetry has recently been seen in Gathering Storm Magazine, Weasel Press, The Write Launch and Door is a Jar Magazine. His short story “The Girl in the Forest” was recently published in “Ghost Stories: An Anthology” by Zimbell House Publishing and his story “For Death’s Amusement” will be published in The Haunted Traveler Anthology in December. His plays have won several awards and have been produced all over the world. They are published by Lazy Bee Scripts. An avid photographer, Mr. Jewett’s photo art has also been published in several magazines online and in print.

His work in Fterota Logia: Bad Luck, Making the Move